Not for me. These are Lulu's resolutions. When a plan comes together

Some of you might remember this drawing that I posted months ago: It's a project that I was working on. Well after 15 rounds of changes by the clients, the install finally happened this week. Take a look at the final product. I think it turned out nicely. I'd work there. Posted by Elizabeth at 5:47 PM No comments:

Just now I heard a commotion in my courtyard that sounded like cats fighting to I flipped on the light and went out there to shoo them off. Oh no that wasn't it at all! It was a pair of raccoons getting it on. Having some early mornin' lovin'. Oops.
Posted by Elizabeth at 7:42 AM No comments:

I hope that you have survived Christmas and are now able to "chillax", as the kids say. My Christmas was quite nice, even if I did return to work all too soon.

And we all had a good time opening our many many gifts. There were mashed potatoes, recipe courtesy of Pioneer Woman.

And we lit firecracker tank thingees on the driveway. Lulu was not happy that she had to stay outside while we ate our Christmas dinner. She would have preferred to be inside with all her people.
Posted by Elizabeth at 9:33 PM No comments:

This morning I woke up at 6am, wide awake. This has been happening lately on my days off. What is that about? So I got up and made peppermint bark and then got started on making the pouches for the boyfriend's nieces. See, he got them ipods for Christmas (best uncle ever!) so I thought that since I had waited until the very last minute (we're leaving around noon to go see his family) that I would forgo the zippered things and just whip up something simple. Which I did. Only, I have no snaps or velcro. So no way to close the little pouch. Leaving the precious iPod unprotected. That just won't do.

So I went back to the zipper plan. And hey! I finally figured out how to work the zipper foot correctly. I R SMRT. But as you can see, it still didn't work out so well. The fabric was too close to the edge and got stuck in the zipper. Oops.

So that's it. I'm calling it quits. No presents from me. I doubt they'll even notice. If you got an iPod, would you? No, I didn't think so.

ps. Beki over at Artsy Craftsy Babe sent me this fabric in a swap over a year ago and I finally decided to use it.
Posted by Elizabeth at 11:35 AM 1 comment:

Living up to the Name

So as 2007 winds down I am once again living up to the Lazy name. See, I had grand plans to whip up some cute little purses for the boyfriend's nieces. They're all about 13. Do you remember what it was like to be 13? I do. Getting a purse with some lip gloss would have rocked. Wait. I totally sound like a dork don't I? Am I officially old now? Hotch-Potch Zippered Pouches
Originally uploaded by salt and chocolate
Anyway, the other night I ran across this blog that has a tutorial to make the pouches like pictured above. Now if I got it together I could make 3 of these in a night easy peasy. But do you see that happening? No. Because it's 5pm and I have had butter softening on the counter since 8am to make cookies and I still haven't done that so what makes you think I'm going to set up the craft table and dig through my fabric stash to find just the right combination of fabrics and so on and so forth and oh god it's just so exhausting. I think I need a nap now.

I just hope they didn't get me anything because then....awkward!
Posted by Elizabeth at 6:11 PM 1 comment:

Do you feel a little stressed out about the approaching holidays?
Posted by Elizabeth at 11:15 PM No comments: Amy over at Angry Chicken has made just about the cutest hilarious gift tags I've seen this season. She's got them in a PDF format so that you can download them and print them out for yourself. Go check 'em out. If I didn't have such a crappy printer I'd be printing a batch right now! Guess what I'll be doing at work tomorrow.
Posted by Elizabeth at 11:06 PM 3 comments:

I can't help myself

I loves me some LOLcats.

moar funny pictures
Posted by Elizabeth at 8:31 PM No comments:

One night a couple of weeks ago I drove by a house that was so badly decorated for Christmas that the next night I had to take the boyfriend by it so he could see it too. So Friday night we drove by it again just so I could take a photo of it for ya'll. In the photo, it doesn't look so bad, does it? Trust me, it's bad. The fact is the lights go on like this for two houses and the yard between them. There is also music. And inflatable things. Given my neighborhood, I'm surprised no one had shot or stabbed the things yet. 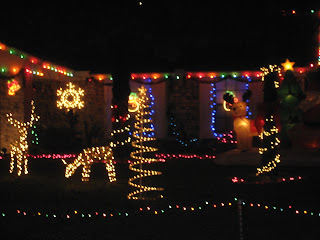 Over at Finny Knits she is posting photos readers have sent her. Go check it out.
Posted by Elizabeth at 11:50 AM No comments:

A couple of nights ago, the boyfriend and I went downtown the walk Austin's Trail of lights. It's held every year in Zilker Park and is a mile long display of lights. At the beginning of the trail is this pretty tunnel of lights. I have to say, it does put the tunnel of lights at my other favorite walk of lights to shame. The boyfriend and I attempted to take our own photo. It took 3 tries to get this one, which is not the greatest but it will have to do to capture the moment. And then we were off, walking down the trail oooing and aaaahing over the lights. Okay, not really. But I did take a few photos. I really liked the first display which was of Where the Wild Things Are (which btw I just discovered is being made into a movie...interesting). Further down the trail was a cute train headed to the North Pole. Across from that was a food area and we were excited to see that the Hey Cupcake! people had a stand. But they were out of cupcakes, which I was okay with actually because I was still stuffed from our dinner earlier at Romeo's. So we continued on. And on and on. Who knew a mile trail could be so long? Were we starting to feel Grinch-y? Then we saw something we could not believe. Southpark characters mingling with the Peanuts gang. What?! Who thought that was a good idea? Near the end there was another tunnel of lights. It was very cool since in the dark the blue lights really looked like they were floating. And then the finale, the Zilker tree. We did not go stand underneath and spin around, as is the tradition, mostly because we were tired and also because I might have hurled my dinner everywhere. So I just stood across the street and took a photo for y'all. Of course, no Trail of Lights (or any other Zilker park function for that matter) would be complete without getting yelled at about damnation and eternal fire by people trying to save your soul as you left the park. I get what they are trying to do, I really do, but come on. How receptive do they think people are going to be to that? Not to mention the yelling really shattered the mellow holiday mood.
Posted by Elizabeth at 11:17 AM 1 comment: Getting ready for Christmas

It's a little bit hard to get in the Christmas mood when the last few days we've had high temps of 85 degrees. So far I've only addressed two whole envelopes for Christmas cards. And speaking of cards....I have a little bit of a card problem. I may have mentioned before that I like to buy them on sale at Target after Christmas. So I've got a couple of boxes from last year. But then I saw some boxes this year that are just so cute that I had to have them. There are now about 8 boxes of Christmas cards and I'm paralyzed by indecision. I can't decide which ones to send out! What is wrong with me? Seriously.

This afternoon Lulu and I are going to Petsmart to have her photo taken with Santa. Hopefully it will turn out better than the one from last year.
Posted by Elizabeth at 1:13 PM No comments: DSC_2605
Originally uploaded by CourtKnee
Posted by Elizabeth at 8:24 AM No comments:

Do I really need another? Another piece of Dachshund art that is. But how adorable is this watercolor print I found on Etsy? It looks sort of like Lulu. But then the symmetry of the wall I have my Dachshund art on would be off (must have an odd number grouping you know) so then I'd have to purchase yet another piece and before you know it I'd be like one of those crazy cat ladies. Only with dog art.
Posted by Elizabeth at 12:29 AM 1 comment: