I am ashamed to admit it, but I've come under the Twilight spell. Over the Christmas holidays I read the first two books at my sister's house and this afternoon I started the third book. I'm about half way through it now. I won't say I'm obsessed. I mean it's not like I have an Edward desktop or screen saver or collect chocolates with his picture on them or anything. In fact, I still don't get all the drama over why he's so hot or an awesome boyfriend or whatever. But is it weird that I find myself identifying more with the vampire than the girl? That says a lot about me, doesn't it?

I promise I'm not going to go around swooning over sparkly Edward now. Because I've seen the movie previews and that actor....NOT HOT. He looks like I could be old enough to be his mother and that is not cool at all.
Posted by Elizabeth at 9:03 PM 6 comments:

Yours is a very bad decision. I think you have made a very very bad mistake. Your timing suu-uucks. There is a time for firing and there is a time for waiting until after the bowl game. Maybe the player was mis-treated, maybe Leach is a giant jerk (really, did he slap kids around on national tv ala Bobby Knight?), maybe this is being blown way out of proportion....I don't know. I do know that there are a lot of pissed off people out there and they're going to yank their money and school support. And I know the crazy people are posting addresses and phone numbers of the parties involved so ya'll better get some security.

ps....I was actually going to watch that stupid game while I sat in my Texas Tech Cotton Bowl sweatshirt from 1992 but now I'm not. So boo on you, Gerald Meyers. I hope you like tortillas because I know your yard is covered in them right now.

pps....Dear God, thank you for making my boss like the other Michigan school so hopefully I won't have to hear all about this on Monday.
Posted by Elizabeth at 5:16 PM No comments:

There really is no way to look cool when you are blasting this song on your car stereo on 7:57am on the way to work, is there? (as if there would be any good time).

But come on, he makes Neil Diamond sound hot. Also, it took my mind off the fact that it takes my entire drive to the office for my car heater to kick in so I spend the entire time freezing.
Posted by Elizabeth at 10:20 PM No comments:

How I spent my Christmas vacation 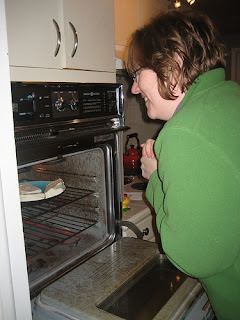 My brother-in-law is part Polar bear and my sister likes to be economical, so they keep their house at a brisk 60 degrees. So I spent my time there bundled up in many layers. If only I'd had my own personal crock pot to stew in.

Knitting my fingers to the bone

I think it paid off. 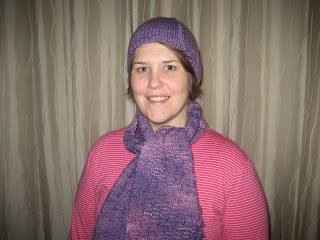 It's snowing!
Will there be a white Christmas for me?
I sure hope so.
Posted by Elizabeth at 2:03 PM 1 comment:

Posted by Elizabeth at 6:54 AM No comments: Pattern can be found here. This was made as a gift for one of my coworkers, as modeled above, and knits up quickly. Yarns details on Ravelry.
Posted by Elizabeth at 7:23 PM 1 comment:

I am no fan of classic rock...but I am watching last night's dvr'd episode of The Sing Off and The Beelzebubs made me like The Who. Seriously, I want this medley on my ipod.

But if they bust out some Rush I might hurt myself trying to fast forward.
Posted by Elizabeth at 6:50 PM 4 comments:

Ya'll don't know what it's like to be male middle class & white.

Wait. Neither do I.

Have you been watching Sing Off?!
I would like to have Ben Folds' babies. (too bad he's already married)
Nerdy, sexy and can sing? Yes please. I bet he likes dachshunds too.

Hehosted an a cappella contest in 2008 and then produced an album and mini-documentary from it. You can watch a video about it here.

I feel like I've blogged about this before. If this is a repeat, my apologies. My brain, it is swiss cheese.
Posted by Elizabeth at 7:30 AM No comments: just want do I think I'm doing, taking her photo instead of feeding her? Please note the healing scratch on top of her nose. She did that after being crated for the day. She must have spent all day rubbing her nose against the bars.
Posted by Elizabeth at 6:52 AM 1 comment:

Lulu's getting into the holiday spirit

Get your Gleek On!

Mark Salling is from the Dallas area. He is going to be there over Christmas (God Bless Twitter). So am I. See, it's Fate! Time to stalk!

The other day I was tweaking my photos with Picnik and was able to turn two okay photos into ones that, I think, are now pretty great.

For this photo I used only the Boost feature. It makes the colors really pop. Lulu's photo uses both the Boost feature and the Vignette features. I like how it creates the soft framing.

There are also premium features available that seem to rival photoshop. I have photoshop on my computer but I have no idea how to use it. If I took more photos Picnik might be something I'd pay for but at this time the free portion works for me. I use the red eye feature often.
Posted by Elizabeth at 8:44 AM 3 comments:

Taking a theme a bit too far

It's the Stephen J Colbert Christmas Tree from Treetopia.com

For the Texas Longhorn fans

For the Texas A&M fans

Posted by Elizabeth at 10:12 PM No comments: