The iPhone is dirty dirty! 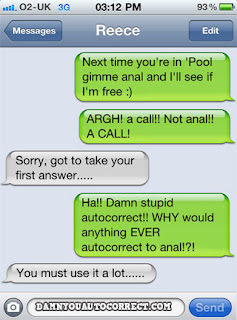 Have you heard of this new blog, Damn You Auto Correct? Be prepared to laugh like a fool in front of your computer. The predictive text and auto correcting on the iPhone can make for some pretty funny texts.

Personally, I haven't sent anything crazy (at least I don't think I have). Mostly just bad typos.
Posted by Elizabeth at 9:51 PM No comments:

How bad could it be? This afternoon I got my first speeding ticket in North Carolina. I knew better. It's a holiday weekend. But you know me, Leadfoot Lizzy. Anyway, I do not understand this whole "points" thing they have here because I never heard of any points when I was in Texas.

In Texas, when you get a ticket, you suffer through Defense Driving and then the ticket doesn't go on your insurance. From what I can tell, that is not an option here. The State Trooper told me that if my driving record was clean (it is, at least in NC. My last ticket in Texas was in 2007) I could go to court on an appointed date in January and ask for leniency. Who knows what that really means.

But really, how bad could it be for the ticket to go on my record? When I ran over that guy in the parking lot* my rates barely went up.

*Relax, he was fine. I backed into him when he walked behind my car.

PS...I was not going 167. If I had been I would be posting from inside the Wake County jail.
Posted by Elizabeth at 7:46 PM No comments:

I'm skating in just under the wire here to make this still be a Thanksgiving day post. I hope you all had a very delicious day. The Boyfriend and I had a low key meal of turkey pot pies, stove top stuffing, corn bread casserole, roasted Brussel sprouts and, of course, pumpkin pie.

This has been a great year and I have much to be thankful for.
Posted by Elizabeth at 11:24 PM No comments:

Getting crazy up in here Have you heard about Four Loko? Several states have already banned it and North Carolina is working on it. The FDA is also trying to ban this malt liquor caffienated energy drink nationwide. Why? Because people are stupid and must be saved from themselves. What's next? Nike shoes because they make you run too fast? ANYway. It's been all over the news here, because there is nothing the Raleigh news likes better than to overhype a story, so you know it made me want to try it. First, let me preface this by saying, I am not a big drinker. If Four Loko had been around during my college days this could have gone a whole 'nother way though. I can definitely see how this would have been a big hit.

So last night The Boyfriend and I found a gas station that still had some of the drink on their shelves. We bought a couple of cans. He got blueberry and I got cranberry lemonade. Sounds delicious, right? Yeah, no. There is a reason the kids are chugging these....they taste like ass. I could only drink about half of mine. I didn't feel drunk, exactly, but I sure didn't feel good. Me and malt liquor don't mix. This morning I'm feeling a bit rough. I'll stick to my Jack and Coke, thanks.

Googling for links to put in this post led me to this blog. It's pretty funny. You should read it.
Posted by Elizabeth at 11:56 AM No comments:

Almost time to decorate for Christmas!

And you know what that means! Time to add to my dachshund ornament collection. Yes, I'm *that* person. But how cute are these little guys from Crate & Barrel? Last night, The Boyfriend and I went to see the new Harry Potter movie. I've read all the books but The Boyfriend has only seen the movies so he didn't know how the story was going to go. I'm sort of bummed for him that his enjoyment of the film might have been disturbed by all the idiots in the theater.

I wish I could say it was just the junior high girls, with their giggling at a shirtless Harry, or crying over Dobby (really, over a house elf? come on), or pointing at the screen. But no, the adult couple sitting next to him were texting away on their iphones. At least dim the screen, people.

At one point during the film, The Boyfriend did lean over and ask the junior high girls next to me to be quiet. He said it much nicer than I would have, which is probably why I just kept my mouth shut. By the time the movie was over I was seething. After the movie, the girls ended up behind me in line for the bathroom but since I'm an adult I decided to be the bigger person and not give them swirlies.
Posted by Elizabeth at 9:21 AM 1 comment: 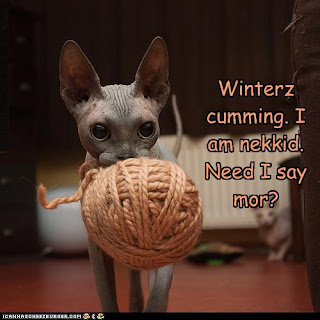 Maybe I should get on with my knitting.
Posted by Elizabeth at 1:13 AM 1 comment:

Recently I was informed that I need to do more things so that I have something to blog about. I suppose eating a Blizzard for dinner while sitting on the sofa watching The Biggest Loser doesn't make very interesting reading. Nor does telling you how I went to Panera for a late lunch and then sat there for a while and read on my Nook some. On the way home there was a stop at the hardware store. Then Dairy Queen for the Blizzard and now here we are.

This past weekend The Boyfriend and I went to watch the Carolina Hurricanes play some hockey. It was my first time at a professional sporting event and I had a great time. Of course, it helped that the 'Canes won. During the intermission between the 2nd and 3rd periods my company sponsored the entertainment, which was a contest of musical chairs.

Posted by Elizabeth at 8:30 PM No comments:

Posted by Elizabeth at 6:15 PM No comments:

Starbucks vs the Old Spice Guy

Posted by Elizabeth at 9:06 AM No comments:

Wrong wrongity wrong. It's the first weekend in November and one of the local malls already has Santa visiting so you can line up for photo ops with your kids. I'm all for cute holiday photos with kids (and pets too!) but come on! Can we at least have Thanksgiving first?

However, my outrage is not going to stop me from going to Home Depot this weekend to pick up a new 6 1/2 foot pre-lit Christmas tree that's on sale. It will be staying in the box until the Friday after Thanksgiving though. That is the first official day it's Okay to put up Christmas decor.
Posted by Elizabeth at 12:09 PM No comments:

I have a new addiction

I used to play Bejeweled, years ago, but moved on to other internet pursuits. But then The Boyfriend kept talking about this Bejeweled thing on Facebook and curiosity got the better of me. The fact that I can play it on my iphone does not help at all. I spent all last weekend trying to beat his high score only to have the contest start over again right after I did. Currently, he's ahead of me again. Two nights in a row I've had dreams about the game where I had awesome amazing wins. Sad. It's a sad sad life I lead.
Posted by Elizabeth at 7:53 AM No comments:

Posted by Elizabeth at 10:36 PM No comments: